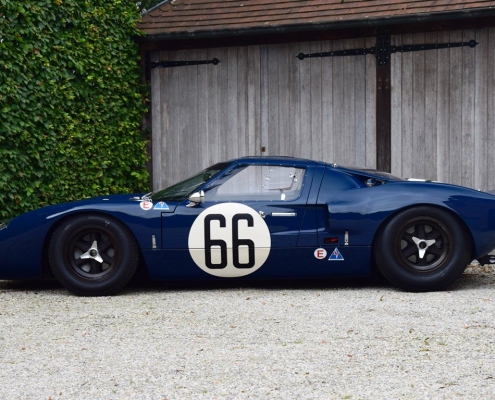 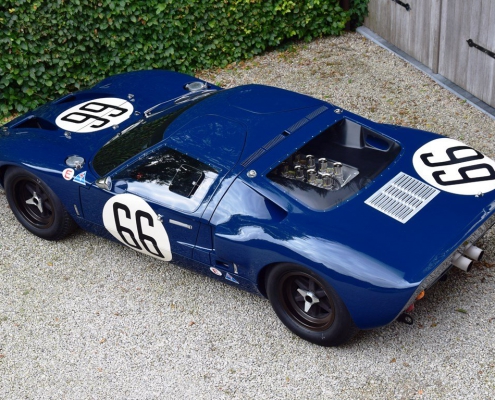 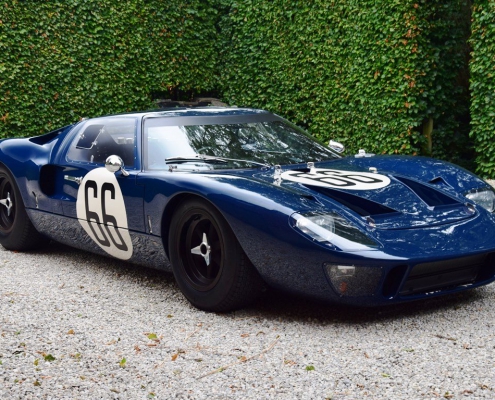 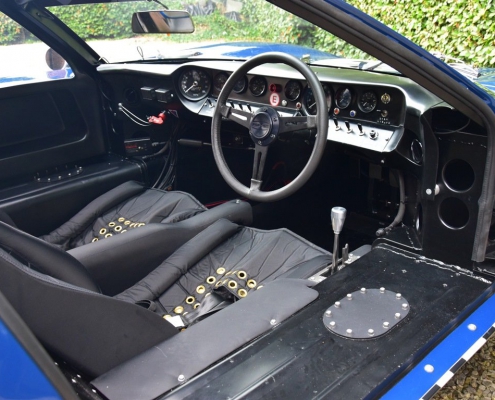 The Ford GT40 was the answer from Henry Ford to the motorsport domination of Ferrari. Developed from the Lola Mk6 and using the 289 ci Ford V8 engine, the car was ready for its first race in May 1964. These early attempts were not very succesful due to reliability problems, and Carroll Shelby was hired to reorganise the racing department. In February 1965, the first win was a fact and from that moment the GT40 became the racecar to beat in any important championship. Ford won the Le Mans 24 hours in 1966, 1967, 1968 and 1969 with the GT40, which is quite impressive as a result.

Today, the GT40 is still a forerunner in the historic racing scene, and the car we are now offering for sale is a potential winner in its class (1962-1965). Beautifully constructed with incredible attention to detail, by famous GT40 specialist Gelscoe Motorsport. This car with chassisnr GEL017 is identical to the original GT40 cars which drove on Le Mans 1965. The brakes are period correct Girling items with Pagid blue brakepads. Hubs, pedalbox, steering rack, wheels, gearshift and fuel caps are all cast magnesium, again as per 1965 Le Mans specification. The 289 ci. engine was build by Steve Warrior Motorsport. Fitted with Weber 48IDA carburetors, and providing 465 bhp at 6800 rpm (dynoed). Of course, the rubber fuel tanks are FIA approved, and are fitted inside the monocoque in combination with a dual pump system. The seats are as per original specification, in special parachute material, and all buttons and warning lights are also to 1965 original specification. This GT40 has a brand new FIA HTP valid until 2029, and is just fully tested and set up at Castle Donington by Gelscoe Motorsport.

This is a beautifully built turn-key ready racecar in brand new and immaculate condition. In the right hands, this GT40 is a potential winner in the Master Series, and it is eligible for many events like Spa 6 hours and Goodwood Revival. So if you are looking for a competitive historic racecar with the best specification, then this gorgeous GT40 is probably the one for you. Competitively priced, incredibly fast and ready to race. Beat the waiting list and get yourself behind the wheel of one of the most iconic racecars ever.