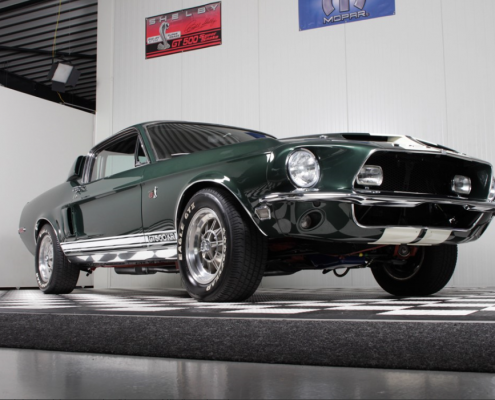 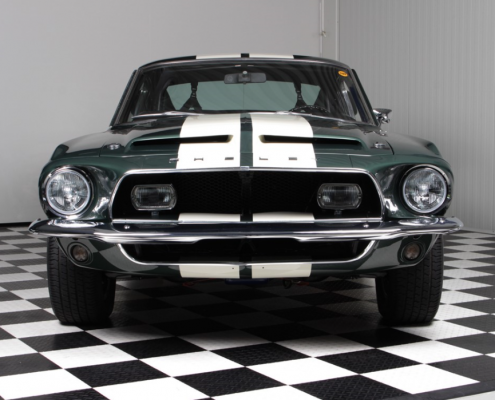 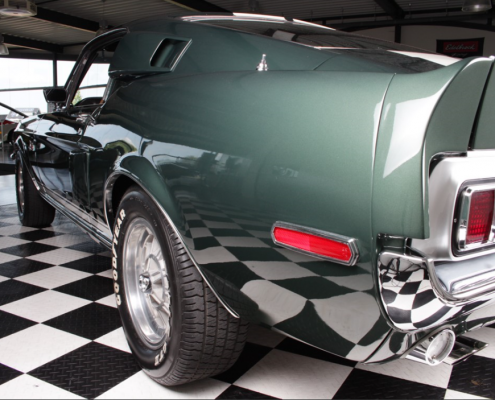 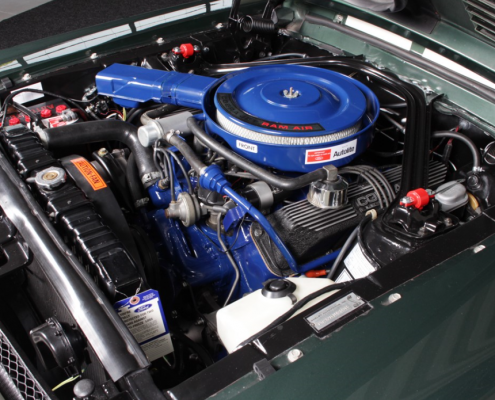 This super original, fully correct 68’Shelby GT500 King of the road, with a manual 4-speed transmission and in the very elegant factory original Highland green metallic paint with white Shelby stripes. This rare Shelby, although completely restored, is still very original and she carries all of her original chassis and sheet metal components, all her correct Shelby parts and her original engine and drive train and is in fantastic overall condition. All the numbers and code’s are correct and we have pictures of them on request.

It’s one of only 1053 ever produced real KR cars and one of approx 480 were the highly desirable 4 speeds. In this, this rare and fantastic, very classy looking Highland green color with black deluxe interior it is estimated that the car as is, is one of only around 49 or less GT500KR 4-speed cars ever produced, so its very rare indeed! And how many of them would still be in existence today? And how many as original as this car? Not many, that’s for sure.

The 1968 Shelby 500KR was the first car that carried the all new and very strong build Cobrajet (CJ) 428 big block performance engines and they were estimated at around 360hp from the factory. However, these ratings were way to low as in later publications by independent magazines and car tests it was found that that should have been closer to 400 or more HP. This, in combination with this car being a 4 speed made it one of the fastest Shelby’s ever produced, hence its name: King of the Road (KR). These cars were unique and one of the fastest Shelby’s or Ford’s ever produced in the muscle car period.

Over the last decades, many original Shelby cars lost either there original engine or transmissions, or had a color change because in the light of day people decided to change the cars looks or details. So it’s pretty rare indeed to find a car that’s not only still in possession of its original factory engine and transmission but also has almost 99% of all its factory original parts still in place. The fact that also all the Shelby specific body parts and all the floors and its complete structure was undamaged and rust free after more than 50 years must have meant that the previous owners really had pampered this beauty.

And doesn’t she look plain stunning in its fantastic and classic Highland dark green metallic paint and its white Shelby racing stripes ?. This combined with her black bucket seat interior and Shelby details make this car one of the most desirable Shelby’s of them all. The fact that she is also one of the rarer and all original KR cars makes her a true one of a kind car. She is absolutely highly collectible and a great investment, but also a car that you can really drive and enjoy. She would love to be taken out to long and fast Sunday drives and she will win awards for you on any car show or Concours the elegance show you would bring her to. This Shelby will really turn heads and be the show of any car show !.

The car we present to you here carries all its original Shelby production numbers and comes with a copy of the Marti report and it’s in the official Shelby registry. It’s one of the most original and rust-free solid cars we have ever seen. And although the car is correctly restored its was done with respect for the original components and details and she is still equipped with almost all the parts she once left the factory with. So this is not an over restored car, but still has many hints of its original glory. Very unique for a 50-year-old classic car.

The car was painted ( 2019) in its correct factory Highland green metallic with white Shelby racing stripes and it just looks stunning on the car with a great shine and it makes the car stand out. The black bucket seat interior is also flawless, completely original and everything is functional as the complete dashboard and all of its gauges and also the heater system were completely rebuild.

The underside of the car shows very well and is correct and detailed to its factory condition. All the brakes, brake lines, suspension and steering components were restored and appear in factory new condition today. The underside is sprayed in the correct factory red oxide paint and you can also still see signs of all the original factory floor and chassis components. All the correct tags and code’s are there. The car also has a very rare and factory original set of 10 spoke alu wheels as were most cars today have the aftermarket version of them.

After it was build in July 1968, it was shipped on the 15th of August to Dan Rohyans Ford inc. in Columbus Ohio, the car appears to have had 3 owners and today the odemeter only shows 85000 original miles. The first two owners had the car around 40 years and the last owner had it for more than 10 years. The last owner also rebuilt the complete engine and drive train of the car. It’s truly an amazing car that’s very original still although its completely restored and in as new condition, detailed and correct.

If you ever wanted a rare and true correctly restored Shelby GT500KR, this might well be the car you want… it’s the real deal and one of the best you can buy. This car would be a great asset for anybody who appreciates the amazing Shelby heritage and in this great classic, racing style colors this car will also steel the show every where you take it. With values of these great cars going up and up these last few years, this car is also a super solid investment with room for growth in the near future especially in this rare color and the car being all correct and the real deal. Last auction’s showed these cars getting sold for well over 250k or more so this all restored car is priced very attractive for sure.