The auction house Bonhams is one of the world’s largest auction houses when it comes to collectables, in the field of classic cars they are one of the top players on the world stage. Their presence on Capital Cars & Classics will not be unnoticed, this week they announced to show a Ferrari 275 GT Spyder at the exhibition, one of the most elegant Ferrari’s ever made!

The Ferrari 275 GT Spyder was produced between 1964 and 1966 and was part of a whole new generation of Ferrari’s where the rough edges gradually gave way to more luxury. So you will find in the interior spacious comfortable seats and a dashboard with wood veneer.

Incidentally, the 275 has lost none of its charm such as Car & Driver magazine so beautifully expressed; ‘Since the engine is heir to a V12 tradition that’s gone on for almost twenty years, it’s only natural that it should be the dominating factor in the car’s personality, and that the whole car should have been developed around the engine and its own unique character. You can feel it as much as you can hear it. It has a taut, powerful rush of response that comes to you through the seat of your pants, through the steering wheel rim. The instant the clutch is engaged, the chassis takes on life and begins to move as a unit with the engine, it’s an all-in-one-piece sensation that you normally feel only in racing cars, one that’s unique to the Ferrari among normal passenger vehicles today.’

This Ferrari 275 GT Spyder with VIN “07 521” has been shipped from Italy on September 22nd 1965 in the US as evidenced by the invoice from the American Ferrari importer Luigi Chinetti in New York. The original color was white with a black interior.

The first owner is unknown, in 1978/1979 the car was registered with the Ferrari Owners Club USA by Richard Mills of Bedford. In 1986 the Ferrari appears in an ad with a yellow paint. In 1988, the car is owned by a Swiss who took the 275 GT Spyder to the current color scheme. Then the car was owned by Bouwe Brandsma, a Dutch-sounding name. He would be the second last owner before the Ferrari on May 13 in Monaco rides on the stage to be auctioned during “The Monaco Sale, Les Grandes Marques à Monaco”. 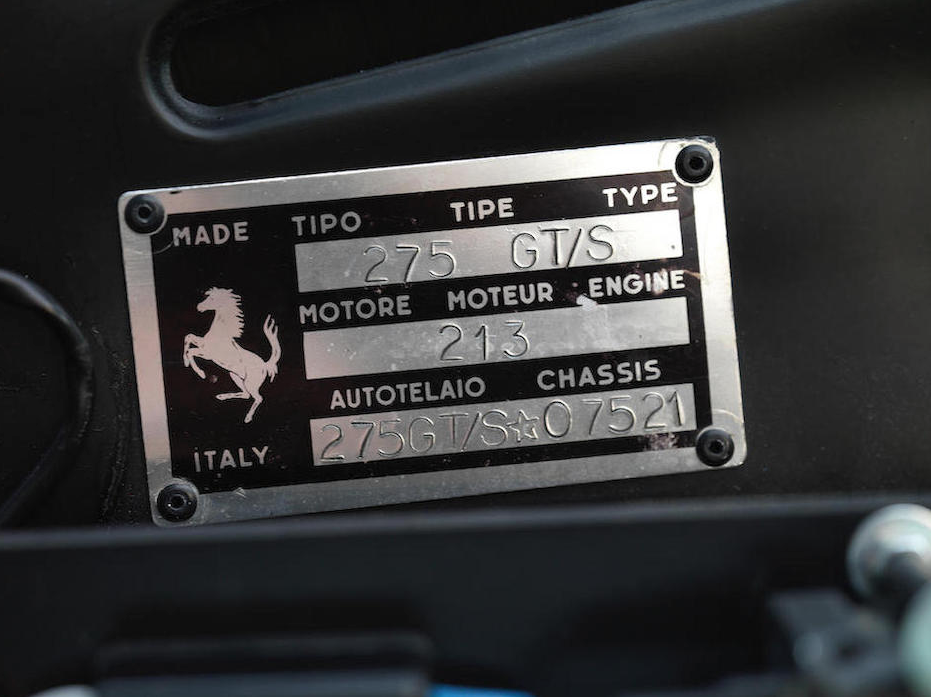 The last owner of the car extensively restored it between 2013 and 2015, which is well documented, it also features a “Ferrari Certificazione di autenticità”. The car then has received numerous awards which says a lot about the quality. The expected yield is between € 1,500,000 and € 2,000,000.